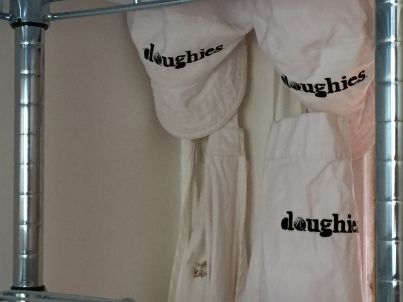 Doughies is now closed for the festive break. The oven door is shut, the aprons hung up, and the starters are in the fridge. In the new year, we’ll get everything going again – including our open food network order cycle which will  re-open with regular weekly bakes (individuals and to the Deli) resuming on Saturday 13th Jan 2017.

The Christmas lull is always a good time to reflect and spend a bit of time at 10,000 ft planning (imagining you are in a plane at 10,000ft looking down at your project). Here’s doughies 2016 in brief:-

So what will doughies be doing next year? We don’t have a fixed plan, but we do have four areas we are really excited about, all revolving around closing the loop. We want to CLOSE THE LOOP with the people who eat our sourdough (1), with the grain that goes into our sourdough (2), with any waste sourdough we produce (3), and the way doughies fits in with other local micro food producers (4). Here’s what we have in mind….

Thanks to all our followers, near and far, those who yearn after good food, made slowly; those making their own sourdough, those eating ours. Looking forward to sharing 2017 with you.