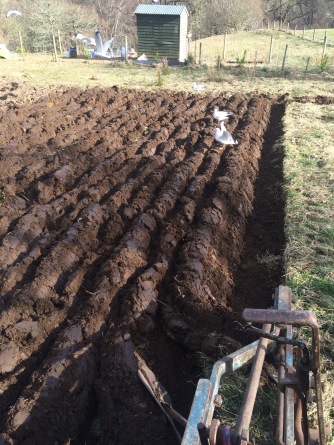 We live in a dirty world.

And there is a lot of words for the layer of dirt that wraps our world.

And there’s a magnitude more going on in that dirt than names we have for the dirt itself. In the region around a plant roots (a region known as the rhizosphere) there are 10 billion bacterial cells inhabiting each gram of soil. We haven’t begun to name and truly understand them all….

Does soil microbiology matter?  Yes. These microorganisms are important because they affect soil structure and fertility.  And that ultimately affects our food. See despite all our accomplishments, we owe our existence to this six inch layer of top soil and the fact that it rains.

See we each have our own microbiology (called a personnel biome)- a colony of inhabitants on our skin, in our mouth, in our gut. Tens of trillions of microorganisms. As we walk around each day, each of us give off millions of bacteria from our human microbiome to the air around us. These micro-organisms both come from our food and go into our food.

Take sourdough bakers [like doughies]; we build up a culture of micro-organisms (a starter) in a mix of flour and water, but its no secret that the micro organisms themselves are from a) the baker, and b) the grain. Which is why every sourdough starter is unique, and why a sourdough starter will inevitable recycle itself into a colony of micro-organisms with provenance and personality. The baker simply provides the right environment for this colony of microorganisms, using hydration, temperature and environment, and there-on uses that culture to nuture a bigger piece of dough into a nutritious loaf.

The same goes for cheese makers, beer brewers, food picklers; you name it. All nuturing micro-organisms in the right environment into the food stuffs we eat. Fermented slow food.

And all starts in that 6 inch layer of dirt.

We should be supporting our organic growers who are nurturing the mother of all our fermented food – this precious layer of soil fertility; as opposed to industrial chemically laced agriculture practices that are stripping it clean.

Which brings me to the topic of this blog post – you’ve probably been reading about it on the beeb and in the papers – the Errington Cheese ban – where in Lanarkshire, a small, Scottish cheesemaking producer had it’s produce banned due to the Food Standards Scotland alleged that some batches of Errington cheese were implicated in food poisoning outbreaks (but yet not producing evidence to support this).

To me, the Errington cheese ban story seems to be a picture of the bigger systemic issues with the way we do grow and produce food in this developed country. On the one hand you have the way we used to do food – it’s slow, small, relies on nature and is historical; this conflicts with the “new” (read last 50 years) industrious way of doing things – it’s fast, it’s big, it relies on surgical cleanliness and chemicals. But we don’t live in a clean world. It’s dirty. Sure there’s a need for all food producers (big and small) to take food hygiene seriously, but the bulk of our food system (and by default the bulk of our food policing) is designed to encourage the big  producers, and either ignore or squash the small.

Who would you support in this conflict? What food system do you want to be part of? Doughies is supporting Errington Cheese thru this crowd fund here; why? Because we want to be part of a food system of micro food producers, that do things slowly and nurture the micro-organisms in our dirty world.