Rustle the top left hand edge of a map of Scotland, and chances are your fingers will briefly touch Uist.

As excitedly reported in the rye-volution post, doughies along with some other local crofters were planning a technical and networking journey to learn from crofters about grain growing, harvesting and drying.

A journey to the edge of the map.

But the edge of the map can sometimes be a challenge to reach.

So when the wind blew strong mid week before departure, and the ferries started getting turned around mid sailing or cancelled entirely, it was looking touch and go if our small group would make it. But plans were adapted last minute and a pre ferry rendezvous set.

Into the old estate was jammed five crofters – one from Inveroy, one from Strontian, one from Muirshearlich and a pair from Lismore. And Glen, an old collie. Bursting with wellie boots, notepads, provisions, dreams and curiosity, we journeyed on the Hebridean from our rendezvous in Uig Skye, past the sleeping dog to Lochmaddy, Uist.

Uist or The Uists are two islands in the Outer Hebrides of Scotland. We had arrived into Lochmaddy, a sheltered bay on North Uist. Our destination lay to the south in a historic crofting township on South Uist via a ribbon of linking causeways running via The Isle of Benbecula and Grimsay.

We arrived late at Howmore in South Uist, and there met our island guide and tutor Maria who greeted us by head torch at the Howmore Hostel run by the Gatliff Trust. Our group had this historic gem to ourselves. The hostels thick stone walls braced against the nights Atlantic wind and the traditional heather thatch weighted with net and stone lay ready to shield us from any wet above. It was early to bed, after a quick dram of welcome.

Uist welcomed us with wall to wall blue skies, and after a slice of sourdough toast and a cup of coffee it was time to meet some Uist crofters.

Our first Uist croft stop was on the island of Grimsay, one of the mid point islands now tied with the central causeway of tar. We were greeted by Mary Norton at the old crofthouse, alongside the familiar form of a pair of black Dexters by a stone shelter. So began our day which involved Uist crofters opening both their barns and their minds. Mary talked blackland centre, grass, mowing & machinery rings – with both an honest practical “here’s how I do it” perspective, and a deeply researched “here’s why” perspective. We looked over her cooperatively owned and run fleet of small agricultural machinery – mostly two wheel tractor based micro attachments, well suited to undulating small parcels of land. We also got a sneaky peak into the Uist Wool mill – a micro spinnery processing Uist fleeces into natural coloured yarns, which although not directly relating to our visit was a tantalising enterprise.

Buoyed with crofthouse tea, jam & scones by the AGA, we departed to our second Uist croft stop on the island of Benbecula. We were greeted with a twinkling eye by Eric Wallis on South Uist, and taken into the Aladdin’s cave that was Eric’s barn. Old Colchester lathes, walls of well worn tooling, floor to ceiling receptacles of hoarded hardware – here was a barn of doing. We’d come here to see Eric’s robust method of drying, cleaning and storing seed (both his own and other crofters). The powerhouse of this drying system was a Lister engined cooling fan, which provided cool air flow to a custom trailer designed to be filled with up to 4 tonnes of wet field grain by a combine harvester. This setup was used to drop grain moisture to the desired 16% moisture content, measured using an analogue grain moisture meter. Dry grain was cleaned using a Scottish made seed grader, which shuffled seed over progressively finer mesh whilst blowing away the chaff. The precious bags of clean dry grain were then sewn up and stored in a vermin proof cold steel shipping container – and protected from grain moth spoiling by sticking paper traps. We got a brief look at the Machair shed where the combine sat awaiting next season.

After a short late lunch pitstop at Howmore, we ended with our third Uist croft stop on South Uist itself. We were waved down by siblings Christine and Alistair on South Uist, outside their corrugated green barn. Inside, alongside sacks of dried seed grain & a small pen of blackface sheep, was no fewer than three old reaper binders – the traditional machine used to cut (or reap) and tie (or bind) sheaves of grain, before field stooking and barn threshing. One machine was in use; behind it a donor for spares; and the last was for sale. The tyres were kicked on the one for sale (though not literally being cast iron shod bands) – a red McCormick International three canvas model. Time will tell but we’re quietly hoping this unique historic bit of grain harvesting equipment might make it back to Lochaber soon to get back to work. Alistair also showed us a grain drying spear, commonly used in large silos to lance areas of higher moisture content, but useful for small scale production to spear and dry a tote bag of harvested grain. Alistair also demonstrated a slight variant digital moisture meter.

Finally a walk back to Howmore on the Machair – under a setting sun, as the local crofters checked their grazing cattle. The machair is shared, in many ways like the common grazing hills of Lochaber, but being flat it is cultivated. Each crofter has two fixed “strips” of machair, perpendicular to the shore. Typically one of these land strips will be good (or prime) and one bad (with a defect such as shorter length). The crofters then have a four year strip rotation (two and two) -two years laid to grain, and two years left fallow, before being put back to grain. The grain mix is typically Rye (Seagal), Oat (Coirce – predominantly small oats [Coirce Beag] rather than big oats [Coirce Mor]) and barley (eòrna). These grains are not currently grown for human consumption (although historically it would have been), but instead is grown for a nutritious silage or hay crop. The mix of three grains provide resilience; giving the crofter more dependable nutrition despite the unknown growing season environment. Different crofters cultivated the land in different ways – Eric described preparing his ground first with the plough, and thereafter discs; before either broadcasting (using a converted fertiliser spreader) or drilled (using a Fiona seed drill), whereas Alistair described seeding directly after the plough, before incorporating with a power harrow. Both crofters agreed that over time, harvested grain tended to progressively bear a greater proportion of barley (being the heaviest headed grain of the mix) requiring a periodic removal of barley to a barley bruiser and thereafter the feed tub to be fed to stock as a dry mash.

We had a hearty meal and chatted into the night amongst ourselves and with some visiting neighbours on food, the environment, crofting past and future and of course magical Uist. It was a joyful and special place to convene.

Thanks go to the Gaia Foundation & the Seed Sovereignty project for supporting the whole endeavour [see their report post here], for our host and guide Maria Scholten and to the crofters who opened up their barns to share in their knowledge. 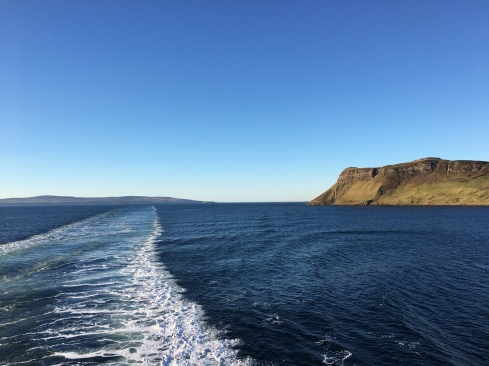 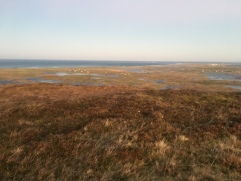 A sunrise climb looking down over Howmore 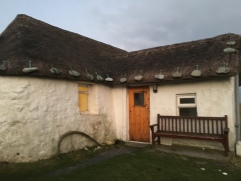 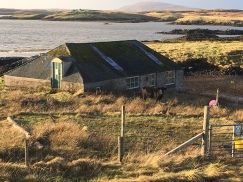 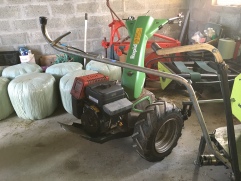 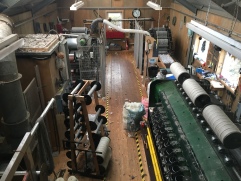 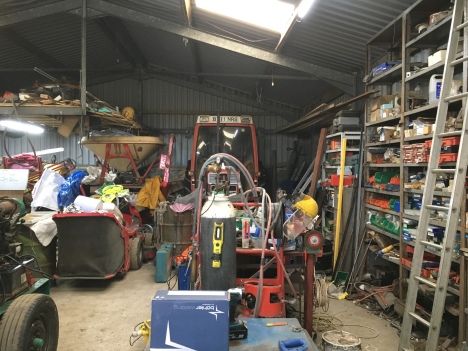 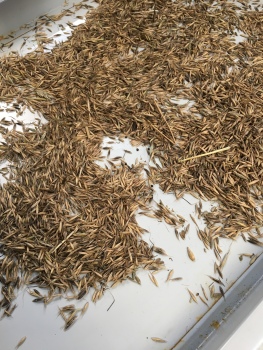 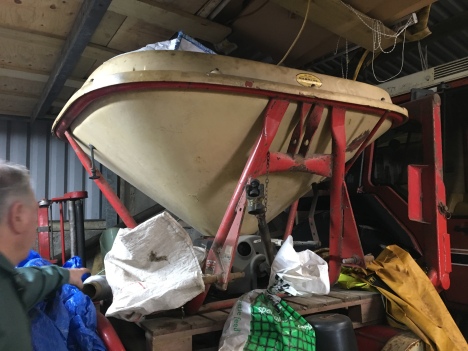 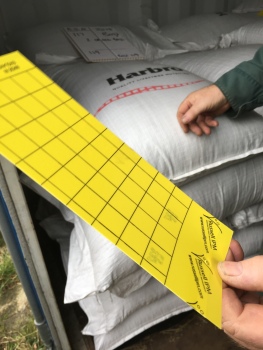 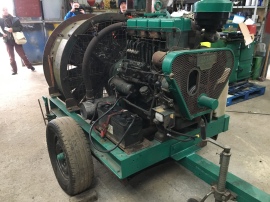 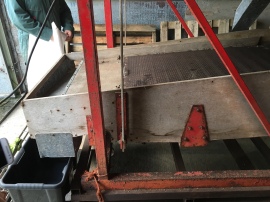 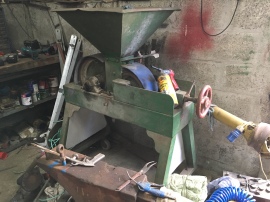 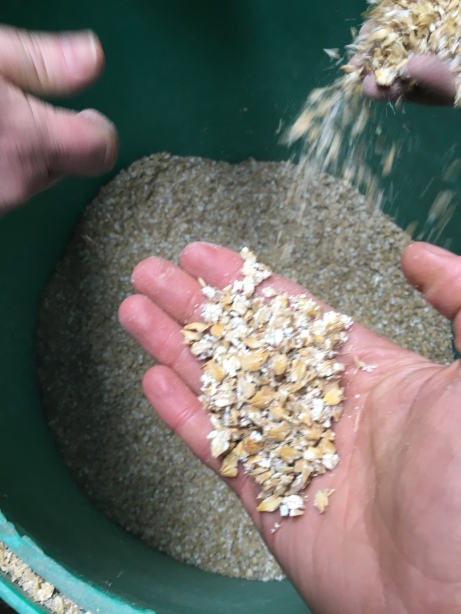 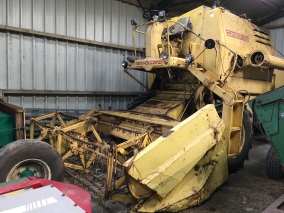 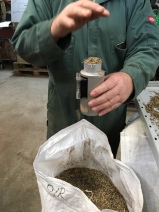 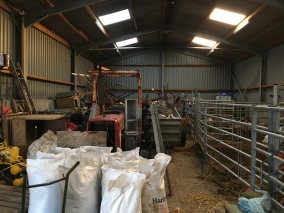 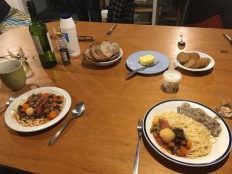 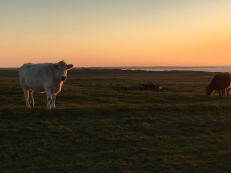 So what’s next? Well not just knowledge made its way off the Uist. Three sacks of seed grain have been carried off the island to the highland mainland as a tangible expression of what is coming next. They are now tucked into barns and byres in Muirshearlich, Strontian and Lismore, and in dormancy will wait out the winter. In the spring of 2019 some of this grain will be planted in fields where grain has not been cultivated in a long time. The genetics and ancestory of this grain is though the closest thing to that previously planted by mainland crofters, and I think the soil will remember and welcome back these grains in it’s humus embrace. 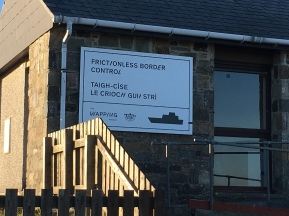 Across the Frictionless Border….

And onto the Mainland… 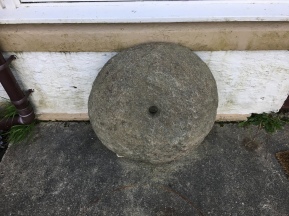 We saw this quern stone on the way home (a small mill a crofter would use) – sign of things to come?

1 thought on “A journey to the edge of the map”