Quite quiet on the doughies blog of late, and I thought it was high time for a mid season splurge of words by way of update.

So our bakehouse has quietly grown in the interim. I reckon we have now gone from nano to pico to micro [and can now officially be labelled a micro-bakery]. 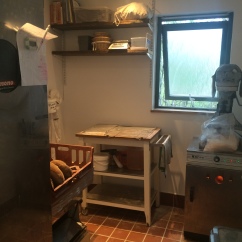 Our new mixer (see below) forced us into moving a wall by one metre or so, and the room dynamics are greatly improved. Two people working no longer requires playing twister, and we are now comfortably swinging a 100 sourdough round the room. In fact We did 119 yesterday in one bake shift (new record).

And it’s soon going to be even more streamlined shortly. With the extra space, we’re going to have a re-arrange and go to a galley arrangement (equipment down both sides), to improve the work flow (time and motion) of our sourdough bake. I’ll post some pictures when its done.

So our new spiral mixer has now softly spiralled nearly a metric tonne (!) of sourdough (10+ bakes, each nominally 100 loaves) and we are pretty happy with it. It’s a bit slower than our old planetary mixer, but slow-food is what we are about. Its easy to clean and remove dough (lift-able head and removable bowl), easy to move (on castors), and (importantly) can handle a full over load of dough with ease. 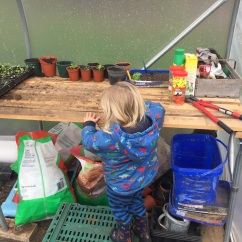 Teaching the next generation to plant seeds

We’ve stepped up our croft vegetable growing this season, as a trial to grow veg on a small commercial scale (think micro production like the sourdough). This season we erected a small 12 ft wide x 15 ft long poly-tunnel (made by northern polytunnels) for use as a nursery space, and got some row crops in the field.

In the tunnel we now have some winter crops germinating  (leek, garlic, onion, purple sprouted broccoli), which will over winter in the market garden beds, and we also have a crop of tomatoes on the go (3 heritage varieties) mainly for domestic consumption.

I started the season with the low expectation of growing one successful single plant of each type (last year I didn’t manage that due to germination, slugs and weeds!), but there’s been quite a lot of produce pumping out of fields – and several crates of veg have made it into the local food supply.

The biggest plague this first growing season has been high deer pressure. Battered apple trees. Topped fruit & potato plants. Up-rooted Kohl Rabi. Oh dear (perhaps I should say oh deer). We’ve managed without deer fencing to date, but a deer proof fence is the only real option to safe-guard the growing environment and truly invest time in the soil and crops. That’s the current croft infrastructure project consuming the hours over the next few weeks as we upgrade our in-bye fence. [If I had one piece of advise for a new entrant crofter it would be prepare for the toil of lifting, dragging, lugging & pulling heavy things from ‘a’ to ‘b’. Fencing seems to be a classic example of this “hard graft”. It is though rewarding toil.]

Looking ahead to the Winter and next season though, with the deer fence up we should be able to lose the row covers (they have been on all market garden beds all season this year due to deer pressure, but traditionally are used only for shoulder season extension and/or on specific crops) and start using our old ’64 tractor for some mechanisation (row crop weeding, ridging), as well as investing in some more long term perennial crops (apple trees etc). I’m particularly excited about that 🙂